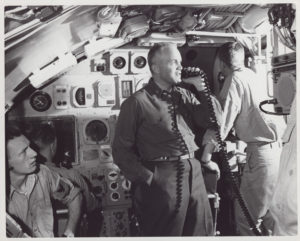 The two images, above and left, are for Triton, our new film about the first submarine to go around the world, submerged. The mission was classified–a secret from most of the crew, and the entire Navy, in fact. The goal was to re-take the initiative during the height of the Cold War, after the Soviet Union had launched Sputnik and ignited the Space Race. The White House wanted to prove American technological and military superiority but in secret, in case something went wrong. And things did go wrong. That’s understandable since a brand new, untested ship was sent on a global mission without a shakedown cruise. There was a deadline to make it back home and many obstacles–including uncharted undersea mountains–standing in the way.

Jukeboxer Productions talked with about a dozen crew members who helped set a submerged record, the wife of Triton’s famous captain, a man who helped build the ship, an active-duty submarine officer and a historian. Our journey took us to four states and, with extensive, actual archival footage and photos, around the world. A harrowing secret mission with Cold War intrigue, heroism and a story only now told completely by those who know it best. Telling untold stories. That’s what we do. Viewers of Connecticut Public TV in November 2018 and LA film festival goers at the Silicon Beach Film Festival in April 2018 agree.

Maybe we were all part of his karass (a kind of cosmic task-oriented group Vonnegut describes in Cat’s Cradle). Maybe it’s because we were native or long-time Hoosiers. We had some kind of karma or mojo working for us as we began to unwrap the multi-layered story of Kurt Vonnegut’s formative years in Indiana. One interview with a family friend led to another, and then to a fellow author and to Kurt’s own children. They remember their dad’s–or their friend’s–pride in his Indianapolis, city of his birth, home to generations of both sides of his family. Those writer friends, especially, also remember his frustration with its narrow, parochial attitudes and reluctance to accept Kurt’s success. Still, as we said in the film, Kurt kept coming back home and Indianapolis grew to appreciate their immensely talented and successful native son.

A story about a great storyteller is a challenge but we’re glad we could meet it on television, going nationwide on APT, American Public Television. Individual stations in large markets and small and statewide public TV networks aired the documentary. It also played on station websites, most notably co-producing and presenting station WFYI. And a longer, theatrical version, was an official selection in a Top 50 film festival.

G-Man: The Making of an FBI Agent 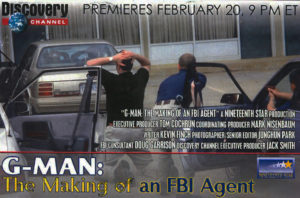 Jukeboxer founder Kevin Finch traveled with producers to the FBI Training Academy in Quantico, Virginia years ago to meet with bureau brass there. How would supervisors of the nation’s premiere law enforcement agency react to film cameras in their presence day after day, at important and even intimate moments in the lives of new agent recruits? At first, the bureau was hesitant but after the program debuted on Discovery in 2002, you could buy a copy of the documentary in the training academy gift shop. It’s still available online.

The film follows Class 01-05 through physical training, classroom lectures, firearms training and testing, emergency vehicle operation, field surveillance operations, plenty of scary scenarios and even moot courtroom sessions. Kevin was the writer for the film, which was also distributed internationally. The Los Angeles Times credited the production team’s (Finch and producer Tom Cochrun and Discovery executive producer Jack Smith) “straightforward style” with bringing the “Quantico experience alive through the eyes of the candidates.”

The documentary is available for rent on Netflix and for sale on Amazon. It’s also available through educational video distributors and libraries.

In the Child’s Best Interest 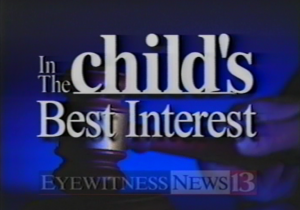 We can go into most courtrooms in America and watch anything from a simple hearing to a murder trial. In adult court, that is. But unless we have a child involved in a juvenile case or we’re serving as a guardian, we can’t even get near juvenile court. Yet, Calamari Productions gained that access–with multiple film cameras–in juvenile courtrooms, holding cells, social service facilities and more. Calamari teamed up with a large market local TV station (WTHR-TV) to tell the stories of children who were victims of abuse and neglect, often wards of the court and never far from more trouble. Sometimes the victims become perpetrators themselves. Still, there are success stories and hope for a better life as lawyers, judges and social workers all try to do what’s In the Child’s Best Interest.

This documentary won the national Edward R. Murrow Award for Best Documentary, was nominated for the national Emmy Award for Community Service and also won recognition from the National Headliner Awards and other honors. Kevin served as co-executive producer and co-writer and Kris Burke created the graphics.

After the FIRST attack on the World Trade Center, in 1993, Mayor Rudolph Giuliani created the mayor’s Office of Emergency Management. The goal was to coordinate the efforts of police, fire, rescue and other agencies for whatever the next big disaster to befall New York City. Nineteenth Star Productions got access to the new agency’s director and to hazardous materials emergencies, fires, scaffold collapses and other incidents that would threaten lives or simply the disruption of commerce in the city’s five boroughs. TLC debuted the film in 2000 and it was received well. However, it didn’t have the half-life that G-Man has. The terrorist attack on New York on 9/11 changed history and the need for a film about preparing for an attack that actually happened. Kevin Finch was the writer on this one.